To start the year with a bang, I have a very special guest on the podcast this week, who I’d like you to meet – his name is, Rishi Narang.

Rishi has an impressive background, and has been involved with financial markets for over 20 years now. He originally started out as an analyst at Citibank, prior to co-founding TradeWorx with his brother Manoj Narang (a fintech company, turned high-frequency hedge fund).

Since 2005, Rishi has been the Founding Principal at T2AM – a fund of funds, which specialize in short term quant trading strategies.

During our discussion (which went for well over an hour), we spoke about; the non-textbook definition of alpha, the components of a black box, where humans have an advantage over computers and vice-a-versa, and we also explore the subject of high frequency trading and speed. “We (humans) are good at coming up with ideas, we’re not so good at implementing.” 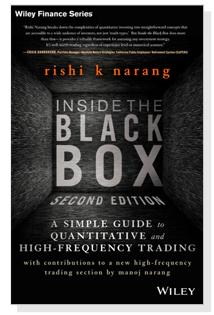