By no stretch of the imagination am I an expert on trading options, however…

Tim Biggam most certainly is – he’s been an options guy since 1985, originally trading on the floor of the CBOE. Thirty years on, options remain his weapon of choice, and the way I see it, that makes him the ideal candidate to write about ‘unusual options activity’.

While this topic can be a little overwhelming if you’re somewhat new to options, Tim’s done a great job of breaking it down with screenshots and a real example for you to follow along with.

It’s also worth highlighting, the software/scanning tool Tim refers to during this article is totally free and includes real time data. You can gain access to RB Technologies here, which will allow you to find similar opportunities in options markets.

Once you’ve finished reading through this article, I suggest you check out my interview with Tim from EP 016 (if you haven’t already).

Tim, take it away…

Unusual options activity (UOA) many times is a ‘tell’, a signal that there is a likelihood of a potential large move in the underlying stock. This informed activity is usually initiated by hedge funds and institutional traders. These insiders will use the options market to make very large bets to profit on the leverage that options provide. Frequently they will use the options market to pre-position in advance of an impending news announcement, such as a takeover, that may not be public knowledge.

Options trading is at the forefront of many hedge fund strategies, and option volume is growing on an annual basis.

So our goal is to uncover what the big players are doing and follow along with them in the most profitable manner possible. It requires knowledge, skill and diligence, but the payoff can be enormous.

Unusual options activity is first and foremost identified by the size of the trade. But you can’t just look for the biggest trades to discover the unusual aspect of unusual options activity. One has to compare it to the average size trade for that particular stock. For example, 2,000 contracts traded in an Apple option would not be considered unusual, since Apple trades 100,000 option contracts or more daily. But 2,000 contracts traded on a less liquid issue would certainly be a more meaningful event. Normally 3-4 times the normal volume would qualify as unusual.

Another screen we employ is to compare volume to open interest. Open interest represents exiting positions outstanding that still need to be closed. If the volume exceeds open interest, you know it is a new opening position, which has more informative value than a closing position.

Finally, we look to uncover if the trade took place on the offer price, meaning the buyer was aggressively willing to pay the higher price to get the trade executed. Trades executed on the offer tend to be a much more meaningful indicator.

While all this may seem to be a daunting process, there is an easier solution. I use RB Technologies option scanners to screen out potential unusual options based trade opportunities, in a much more streamlined manner. The technology they employ allows filtering for size, open interest, and trade in relation to bid/ask, plus it is available to the individual trader.

So let’s run through an example from start to finish…

On 3/10/2015, using the RB Technologies scanning tools, we uncovered a potential trade idea on Kraft Foods (KRFT), which you can see here: Big Bull screens for call buys that took place on the offer, in this case 10,000 KRFT June 67.50 calls traded @ 0.70. The open interest was only 5,382, so the size was 1.86 times the open interest. This trade fits three of our criterion employed, namely large call buying which is greater than open interest and takes place on the offer. That just leaves us to do some implied volatility analysis, which we will delve into below. The June 67.50 call volume of 15,609 drove the implied volatility from 18.94% to 21.84%. With the stock down 0.77, or 1.24%, the call price actually increased 0.1! Normally, one would expect the call price to drop 0.16 given the drop in the stock, but the aggressive buyer was willing to overpay to get the trade done. The June 70 and 72.5 calls popped in sympathy as well. I highlighted the comparative changes to arrive at our trading edge, seen in the table below. This combination of volume and volatility many times tends portends a continuation of the upside in the stock, as the buyer of the calls is aggressively positioning in a bullish manner.

Two weeks later, on March 25th, 3G and Berkshire Hathaway announced a takeover of Kraft, causing shares of KRFT to surge to over $83 per share, a gain of 36%. All unusual options activity will not be this foretelling or profitable, but by following the big and unusual options order flow, many times we can follow along with the large hedge funds and institutions to put ourselves in a position to profit.

If you have any questions or you’re interested in further information and research, please leave a comment below or send me an e-mail [email protected]. 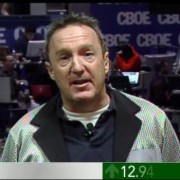